Do I Have Nasal Polyps?

Do you suffer from recurrent colds and flu? If yes, you may have nasal polyps. 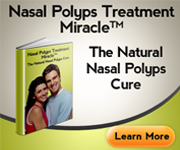 Nasal Polyps, also known as Sinus Polyps, are non-cancerous growths in the nose or in the sinuses (the canal behiand your cheekbone). The cause symptoms similar to those of cold and flu; however, the symptoms caused by nasal polyps will never get better. You may therefore have a persistently blocked or stuffy nose, and you may experience mucus running down the back of your throat. In addition, large polyps interfere with breathing and this can cause chronic headaches due to lack of oxygen. You may also find yourself yawning a lot, and experience daytime fatigue, even after a proper night’s sleep. You will notice that you don’t smell or taste as good as you used to.

Nasal polyps in the nasal passage can be visible to others and be very embarrassing, especially if you get asked what’s wrong in your nose! They have a teardrop shape, and may be pink, yellowish or grey in colour. They are soft to touch and have a jelly-like texture. Polyps can occur singly, or more often in clusters, a condition called polyposis. Often if you have polyps on one side, you will most likely also get them on the other side. Nasal polyps should not be left untreated. They increase your risk of nasal infections, which can be fairly serious. In addition, they tend to grow in size, and can cause pain, discomfort and swelling. Very large polyps can alter the shape of your face and be very embarrasing.

The exact cause of nasal polyps is not always known; however, what is known is that ultimately they occur as a result of an irritation and subsequent inflammation of nasal linings. This may be due to a chronic allergy, such asthma or hay fever. They may also be due to frequent nasal and sinus infections, an adverse reaction to aspirin, or living in heavily polluted areas. Injuries to the nose, mainly those which alter the shape of the nose, also increase the risk of getting nasal polyps. All these factors will cause the cells in the nasal linings to get inflamed, causing fluids to build up in them. Eventually, gravity pulls these fluid-laden cells down, resulting in the characteristic tear-drop growth of nasal polyps. If you suspect you have nasal polyps, you should get them checked by a doctor. A doctor will take a history and carry out a physical examination, sometimes with the use of a nasal speculum. In some cases, a CT scan or X-ray will be needed to confirm the diagnosis. You will then be adviced either to start steroid therapy or to undertake surgery. However, both of these approaches are only a short-term solution and are associated with a number of side effects and complications.

A permanent nasal polyps solution should be holistic and tackle the underlying cause of nasal polyps, and not only the symptoms. For more information on such as system, visit Manuel Richards’ Nasal Polyps Treatment Miracle™ program  CLICK HERE!  Manuel Richards is a certified nutritionist, a biomedical researcher and a holistic health consultant. Manuel Richards’ articles and work have been featured worldwide, both online and in print. Learn more about The Nasal Polyps Cure