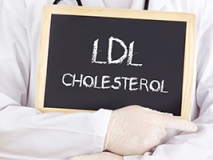 High cholesterol, is it caused by diet, lack of exercise, your genetics or what? New research, just published in Science Magazine, reveals at least one major reason some people have high cholesterol and other don’t – even if they share the same lifestyle. What’s more, it’s the same angle as causes arthritis, schizophrenia, eating disorders and visceral fat accumulation.

And it’s all somebody else’s fault!

A few years ago, scientists started to construct a complete genetic profile of a female Neanderthal from her bones found in the Vindija Cave in Croatia. Since Neanderthals and homo sapiens mated and had children, they wanted to understand which genetic factors came from the Neanderthals. After all, almost all of us probably have some traces of their genes in our blood. We probably inherited our genes for rheumatoid arthritis, schizophrenia, eating disorders, visceral fat accumulation, and cholesterol from our distant ancestors.

But one of the genetic variants for cholesterol we inherited from them is actually positive. It’s called rs10490626 and is associated with LDL (or bad) cholesterol, and most of the people who carry it have relatively low levels of this type of cholesterol. Does this really mean you should sit down helplessly and blame your cholesterol on your ancestors? It certainly does not. Whereas genes play some role in the game, the main reason for high cholesterol and most other health issues is caused by our lifestyle.

And most amazingly, the main reason for all plaque buildup in our arteries is caused by one ingredient, you didn’t even know you were consuming.

A new study now suggests that this is wrong, and that lowering LDL cholesterol may be completely useless to avoid heart diseases. To understand how this works, you should understand how cholesterol is carried in your blood stream. Cholesterol travels through your blood stream in protein parcels called lipoproteins. The lipo (fat and cholesterol) is inside, the protein cover is around it. LDL stands for low-density lipoprotein. In the new study, published in JAMA Cardiology, researchers treated groups of people with different substances to lower their LDL.

So, what is apoB and why is it so important?

ApoB is a protein without which these lipoprotein parcels that carry cholesterol cannot be formed. Wherever you find a well-formed LDL parcel, you will find ApoB around it. When a laboratory measures your LDL, it measures not only the number of LDL parcels that travel through your blood stream, but also information on the size of the LDL parcels to estimate exactly how much cholesterol they are carrying. This means that, when your LDL cholesterol drops, it may be either because the number of LDL parcels drops, or because the size of the parcels drops while their number remains the same.

When a laboratory measures your apoB, on the other hand, it measures only the number of LDL parcels, with the amount of cholesterol they carry being irrelevant. Therefore, this new study shows that to cut your heart disease risk you need to cut the number of LDL parcels in your blood stream, not the amount of cholesterol carried by these LDL parcels. The scientists did not speculate why this was the case, but the fact that each of our body’s cells has only one receptor to receive apoB might explain it. Your body’s cells want to absorb the LDL that is currently travelling through your blood stream so that they can use it. But if you have too many LDL parcels, these parcels have to wait in a traffic jam outside your cell’s limited apoB receptors before they can be absorbed.

This means that LDL parcels have to circulate through your blood stream for long periods before they can be used, increasing the chance that they will become oxidized (go rancid),  and it’s oxidized cholesterol that forms plaque in your arteries, causing stroke and heart attack.

Learn how to clear your arteries of oxidized cholesterol and prevent stroke and heart attack – in 30 days or less – Click Here!